Have a Question? Ask Us!

For more than two decades, Making Strides, an extension of cancer.org, has united communities in the fight against breast cancer, and Kitchen Magic is proud to be its sponsor 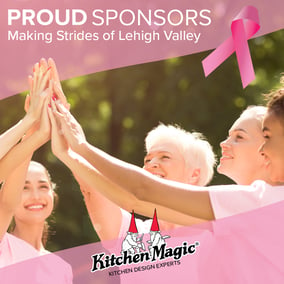 Nazareth, Pa. – October 10, 2022 – Kitchen Magic, a family-owned and operated kitchen remodeling company, announced a month-long sponsorship campaign of the Making Strides Against Breast Cancer organization. The campaign will be taking place throughout Breast Cancer Awareness Month in honor of those affected by the deadly disease. For every kitchen remodeled by Kitchen Magic during the month of October, a donation will be made on the customer's behalf to Making Strides. Kitchen Magic pledges to donate up to of $1,000 during the campaign.

In addition to the donation, Kitchen Magic employees will participate in the Making Strides walk taking place on October 15th in Bethlehem, PA. The company's president, Brett Bacho and his band Gnome Man's Band will be performing at the event. To further show support for the cause, Kitchen Magic will be offering gifts and giveaways at the event and in further support will change the gnome hats on its logo to pink during this month of awareness.

For more than two decades, Making Strides – an extension of cancer.org – has united communities in the fight against the disease by way of funding breakthrough research, offering 24/7 support for breast cancer patients and providing access to lifesaving screenings. Today, Making Strides is the largest network of breast cancer events nationwide.

"This worthy cause will help ease the impact for so many, effected by this illness," said Joey Piazza, Director of Marketing at Kitchen Magic. "As a family-owned organization, Kitchen Magic is honored to aid the work done by Making Strides and contribute to its mission, supporting those currently battling breast cancer and survivors as well as their families and communities."